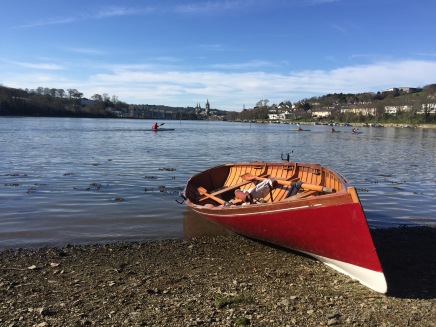 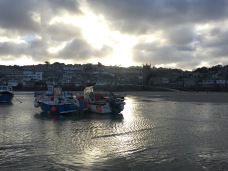 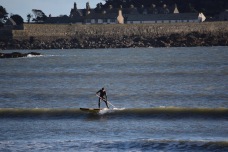 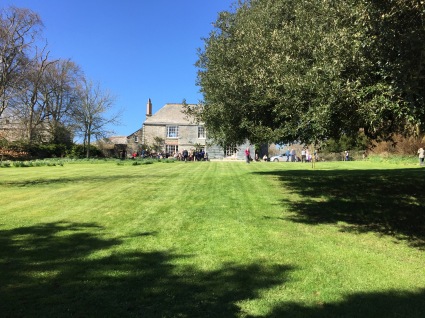 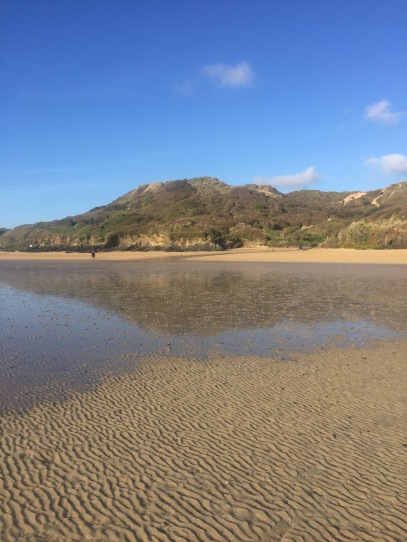 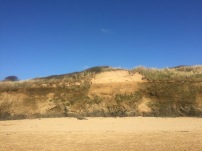 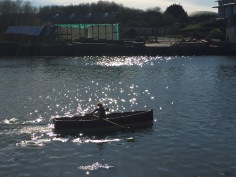 Spontaneous adventures are often the best but planned ones fitted into a busy life can be just as good. It’s been a busy week with work moving at 100 miles an hour so I’ve surprised myself that there’s been time to enjoy our incredible surroundings too. Wednesday evening was one of those that I’ve come to understand happen only in Cornwall! Just after 7pm I picked up The Dave’s and armed only with folding chairs and warm jumpers we drove the 10 minutes from Truro to Trelissick. We parked the car (free again – thanks National Trust) and along with other determined souls made our way down the hill to the King Harry Ferry. We weren’t going on the ferry, rather, in Cornish style we were setting up our deck chairs to watch a local legend entertain and delight while he bobbed gently on The Fal (or was it the Tamar?). Another local legend was present. Steve Skinner of Skinners Brewery was doling out plastic pints of his Lushington’s brew which had travelled well all the way from HQ in Truro. That hit the spot and set us up for the show to come.

Just after 7pm I picked up The Dave’s

Kernow King is well known locally and is the younger successor to Jethro …although I think both of them would disagree with this label! Kernow King’s act (this was his greatest hits) is (in my opinion) hilarious. Observational comedy about life in the Duchy, delivered in a range of local sounding voices, what’s not to like?

There was a good contingent in the audience from St Mawes and they were a great target for Kernow King’s take on the local property market and an ace bit about a fisherman selling his damp little cottage to someone for over half a million. All the stuff that winds you up but you take for granted was in there, the width of the roads, following tractors, emmits – you name it. As we watched, listened and laughed the sky darkened and the lights on the makeshift ferry stage brightened. The Skinners went down and laughter reverberated around the riverbanks.

That was Wednesday evening, today is Saturday and last night one of The Dave’s had a fantastic flash of inspiration. It started with a late text suggesting a dawn raid. I made a pretty feeble excuse based on my poorly foot. As I typed and sent the text back I realised how literally lame I sounded. I manned up and agreed to meet first thing. 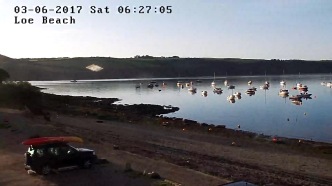 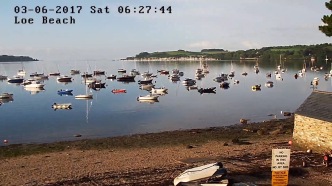 0700 Loe Beach Car Park. Such a good call by me-mate-Dave. Sun just peeking through thin cloud, water like a mirror. The air still and quiet. The only noise to be heard was the excited chat of two forty something blokes pumping up paddle boards! I congratulate Dave on his epic idea and before we know it we are paddling up The Fal (or is it the Tamar? [inside joke from Kernow King]). Progress is steady as the noses of our inflatable SUPs break the pristine surface of the salty highway. The route is so familiar to me but I lost count of the new things I noticed. Pill Creek was a painting waiting to happen. “Where’s my effing easel?!” I half seriously blurt out. Looking from the mouth of the creek you get a really special view and notice so much. The yachts in the mouth point into the tide standing proud and tall while their compadre’s up the creek lay stranded on their sides looking awkward and beautiful at once.

The only noise to be heard was the excited chat of two forty something blokes pumping up paddle boards!

As we pass Pill Creek I notice the abundance of oysters on the rocks. I don’t think it used to be like that and wonder whether this is the invasion of a foreign species thriving over our Fal natives? (I’ve googled it and yes – these are the invasive Pacific Oysters) As we silently move on, the atmosphere is ruptured by the most incredible squawky shrieks coming from the woods above. We ponder for a while and then suss out that there’s a heron’s nest up there and the din is the young competing for regurgitated fish! The calm returns as the parent bird flies off in search of more.

We paddle across towards and then past Turnaware Bar. Turnaware is a place that reminds me of my teenage years and I witter on to me-mate-Dave with stories of great days ’round these parts. We cut back across the river and paddle up past the woodland walk at Trelissick. I notice something blue down in the water. I stop and lay down on my board to reach down into the clear water for it. A roll of something boaty that’s been dropped. I do my bit for the planet and stash the jetsam on the front of the SUP. We carry on up past the King Harry Ferry and all the way to Roundwood Quay on the corner of Lamb Creek and Coombe Creek. (Another special place for me, we lived briefly in a house at Cowlands and used to walk over to Roundwood from there.)

Time is ticking on so it’s time to turn and paddle for home, against the tide and against a freshening breeze. We work up a sweat and an appetite and no wonder, it’s gone breakfast time! Back at Loe Beach we unroll the blue canvas thing I found. It turns out to be a lost banner. It looks like it may have floated here from somewhere a long way away…

(I’m wondering now if the banner could really have drifted over from Western France where there’s a one star hotel called Le Sympatic. I’d like to think so.)

We pack down our boards and peel off our suits. They are frying bacon in the cafe and it smells incredible. Quick, in the car and head for home before I settle in for a fry up!